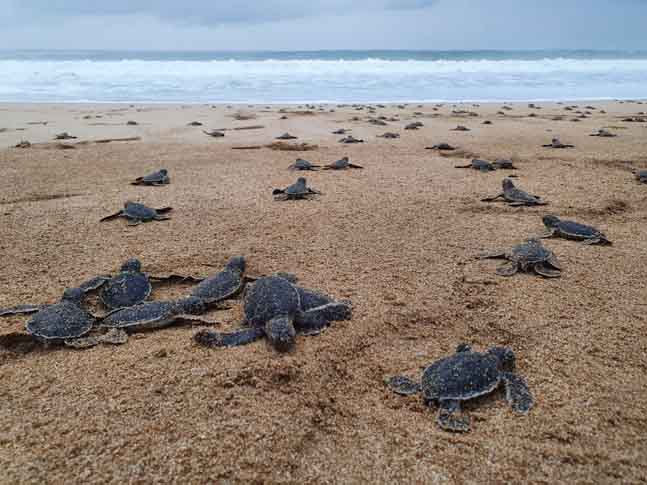 Pangumbahan Turtle Beach on the Indian Ocean coast is probably one of the best beaches in West Java; unfortunately you can’t swim as the waves are huge. A highlight is the Turtle Conservatory (Sanctuary of Pangumbahan) and their turtles. 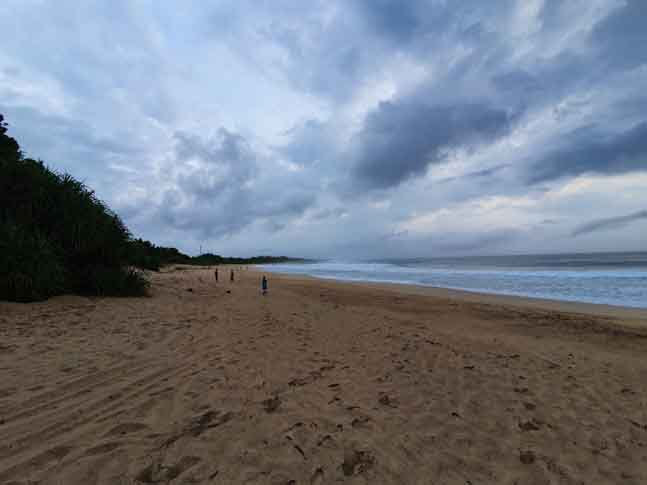 Baby Turtle Releasing Programme
The baby turtles are released into the sea at around 5.30pm every evening as dusk falls. Staff mark a line in the sand from which the hatchlings are released.  Tourists are not allowed to cross this line or touch any hatchlings (unfortunately, only in theory, because some people crossed the line and / or touched the babies). Following the line being drawn, staff members turn out baskets full of baby turtles, so the hatchlings can make their way to the ocean.
If you arrive at the Turtle Conservatory early, you might be able to observe the caretaker dig out the newly hatched baby turtles from the sand in the nursery. We asked to touch the egg remnants (we found it exciting to touch the hatched egg shells). The nursery itself looks like a sand box.
​After collecting the eggs from where they have been laid on the beach, the staff members continue to group the batch of eggs together in the nursery.  Each nest in the nursery has information on it stating the date taken, number of eggs (some nest have more than 100 eggs), and approximate date when they will hatch (usually it takes 60 days to hatch).
We also asked to see the turtles they have in the pools in sanctuary (next to the nursery and entrance to the beach). 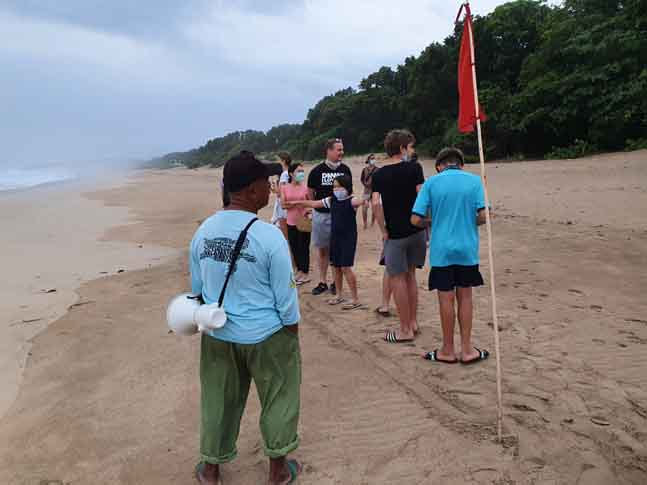 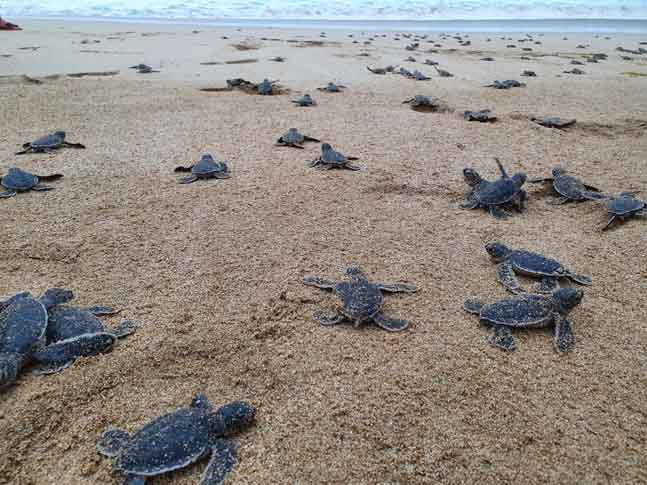 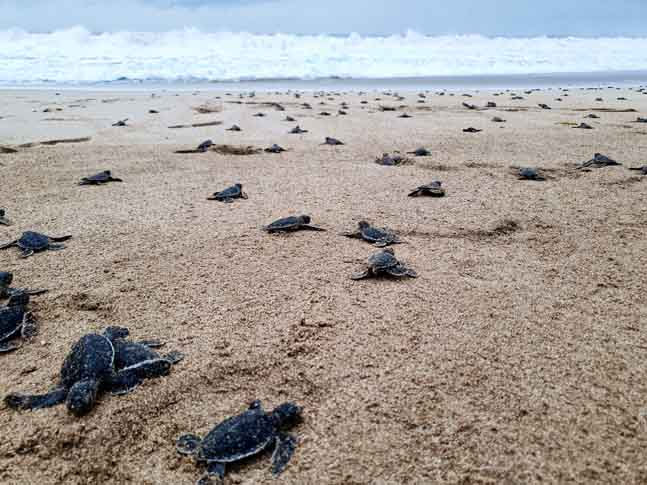 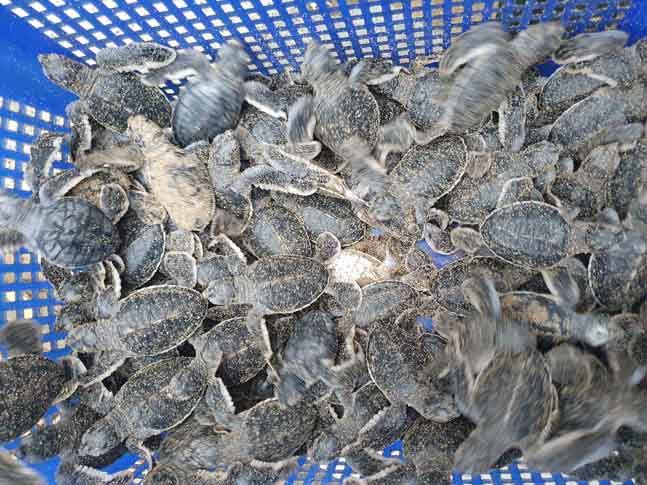 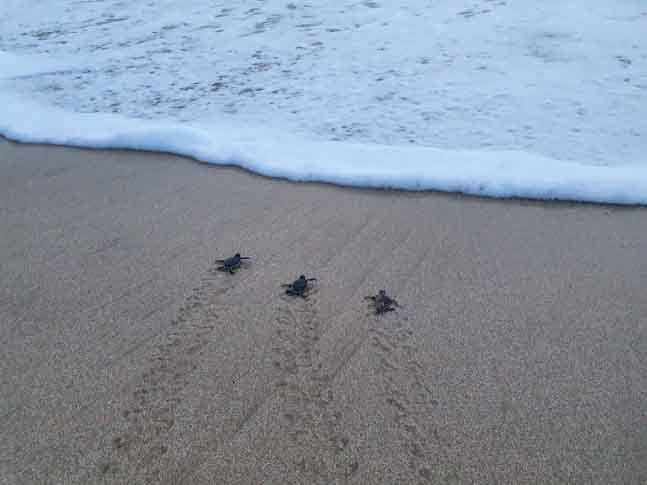 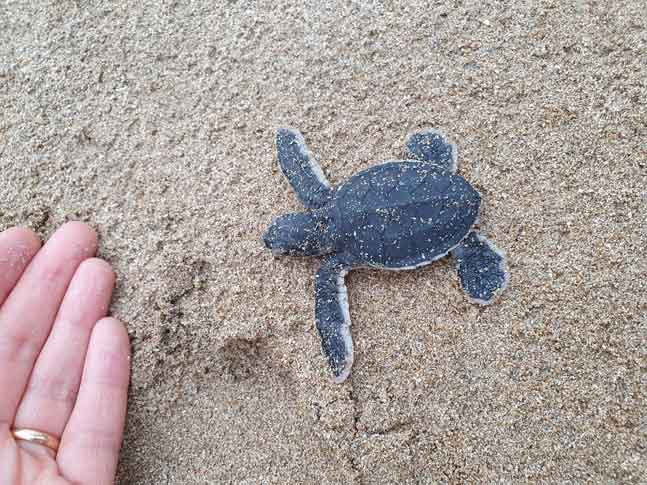 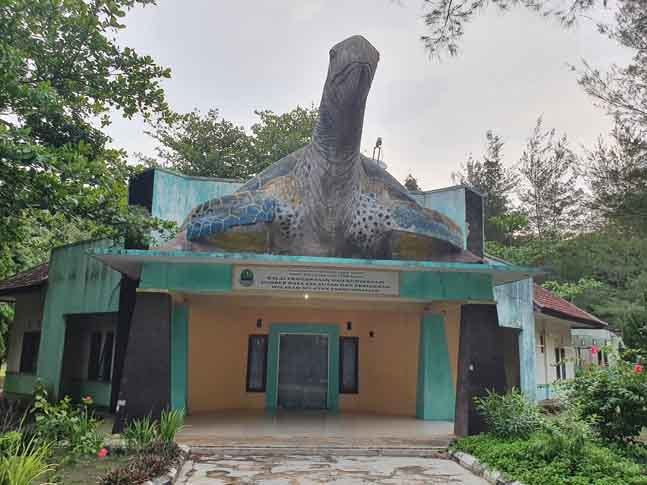 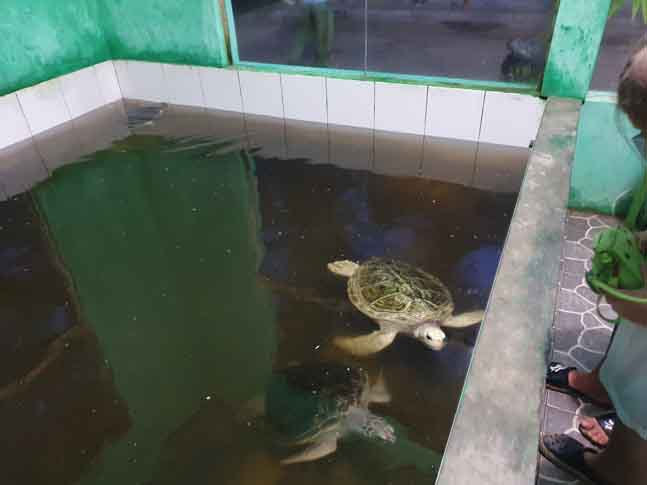 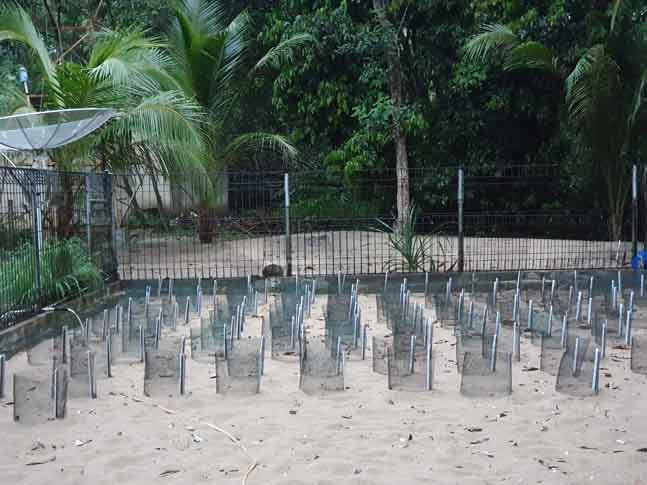 Laying of Turtle Eggs
After sunset at 6pm everyone must leave the beach as it is time for big mother turtles to return to the beach and lay their eggs (this may happen over successive days). They arrive at any time during the night often after a 30 year absence. The beach is visited by 0-20 turtles per night, but not all of them lay eggs.
We gave our phone number to the sanctuary caretaker for him to call us if a turtle arrived and went back to hotel for dinner.
The Beach has 6 posts, and each is watched by a member of staff every night. They wait and guard the female turtle until she finishes laying her eggs and returns to the water, then they mark the location of the nest, dig up the eggs in the morning and move them to the nursery.
The caretaker called us at around 8pm, as a  turtle had arrived at the beach. Because the dinner took ages, we arrived late and the turtle had disappeared, but we were lucky as another turtle made its way onto the beach.  However, we had to wait for 1 ½ hours.  This was to allow her to find her ideal spot for laying her eggs and to get comfortable and focused.  Once immersed in laying her eggs we were invited to observe her.  We were told this was because once she was laying her legs she was so focused on the act that she would not mind being observed. Prior to this we had to wait sitting on the beach listening to the waves which was magical (at least for me, the kids were quite sleepy already) keeping quiet.
The caretakers are knowledgeable however they speak Indonesian only. 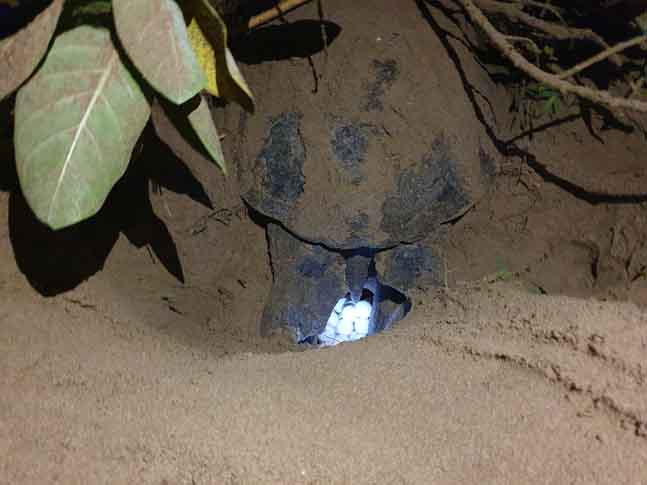 Some of the fascinating facts about the Green Sea Turtle:
Here are 2 scientific articles about turtles at Pangumbahan beach and 1 about Sea Turtle FAQ:
1) http://www.bioflux.com.ro/docs/2020.318-329.pdf
2) https://core.ac.uk/download/pdf/39302121.pdf
3) https://conserveturtles.org/information-sea-turtles-frequently-asked-questions/ 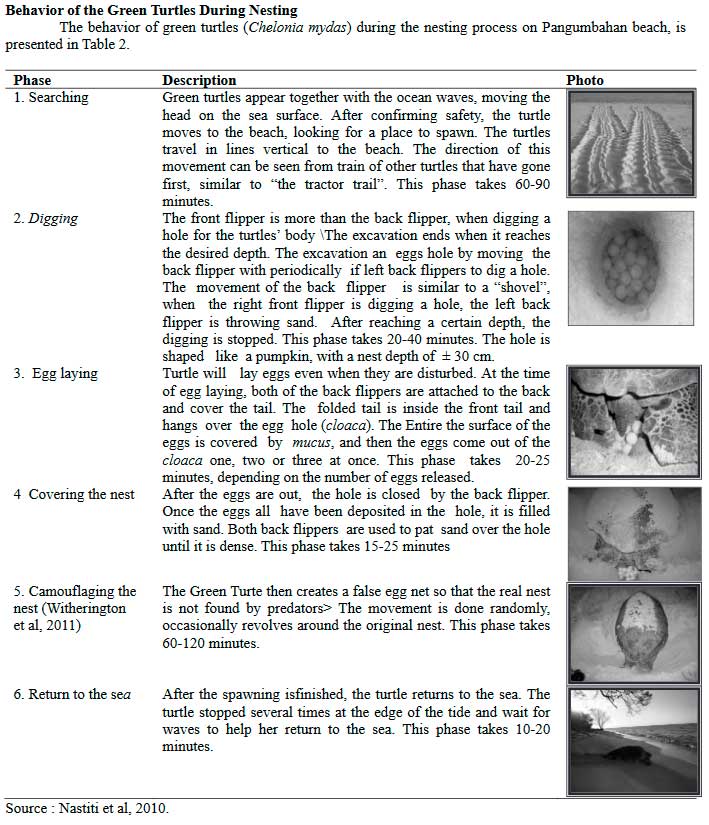 Timing is everything
Accommodation
We stayed at Turtle Beach Hotel, which we didn’t enjoy, but it is considered the most “luxurious” hotel in the region. The bed sheets were dirty, bathroom smelt and tap water for bathing tasted salty. Luckily the pool and garden were clean. Food in restaurant was ok but it took a long time to prepare it (order in advance!). Seafood was ok but it was made of frozen fish.
The journey from the hotel to the Turtle Conservation Centre is 10 minutes by car (30-40 min walking). 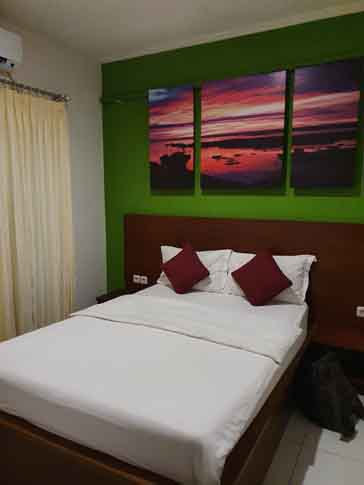 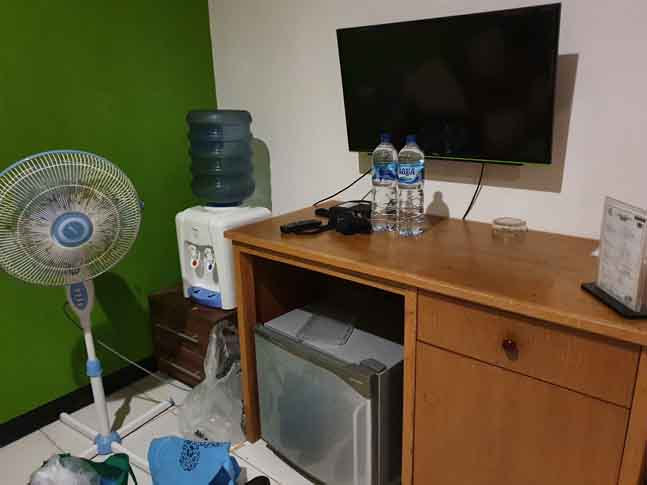 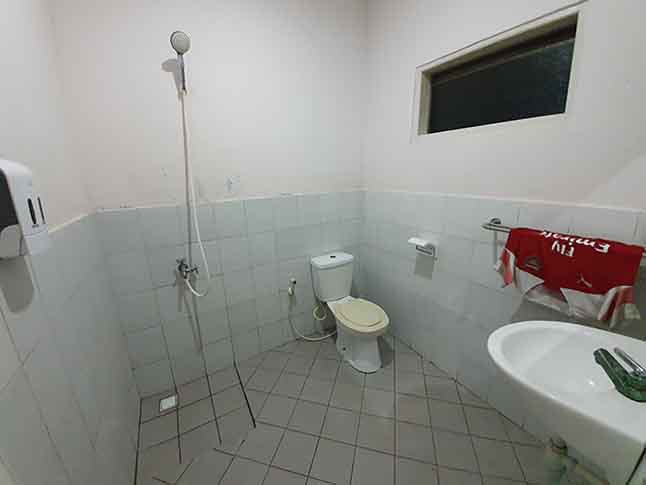 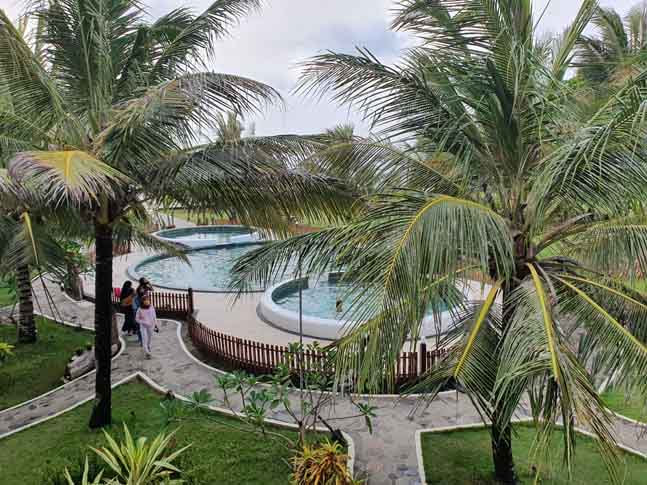 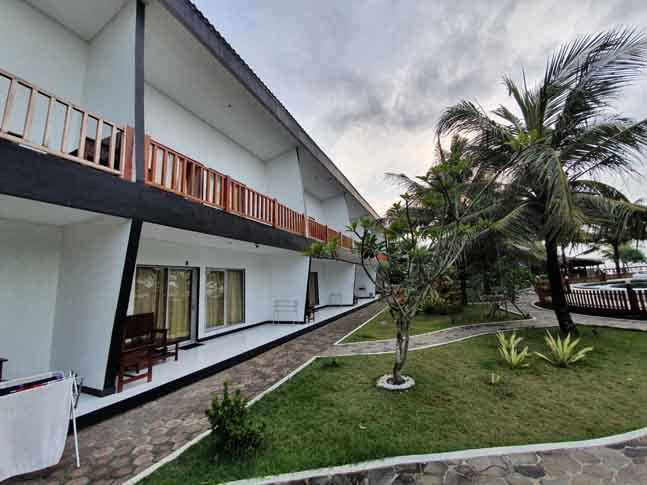 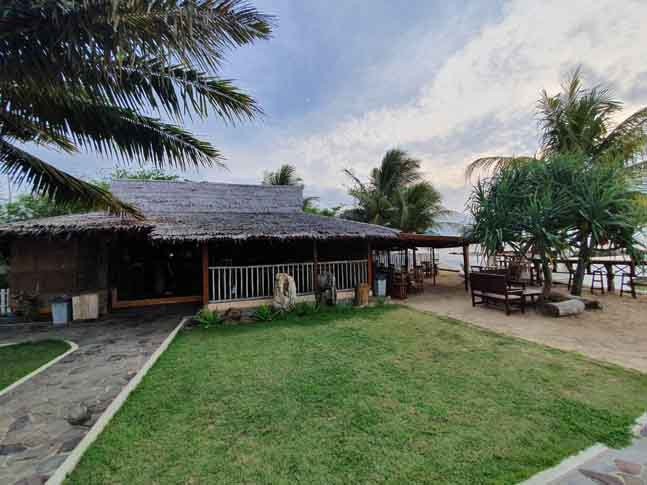 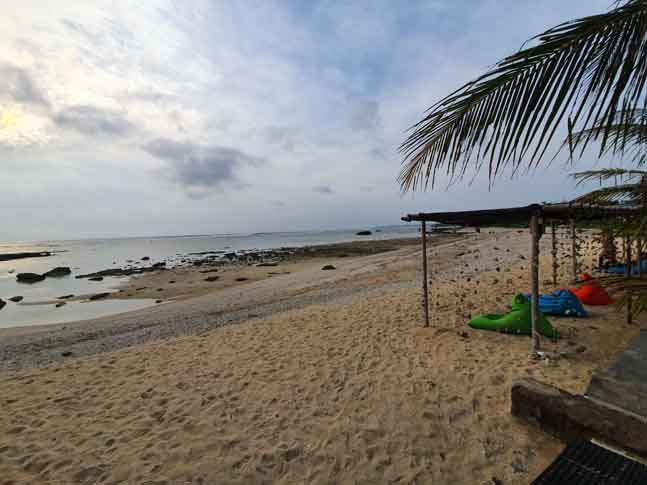 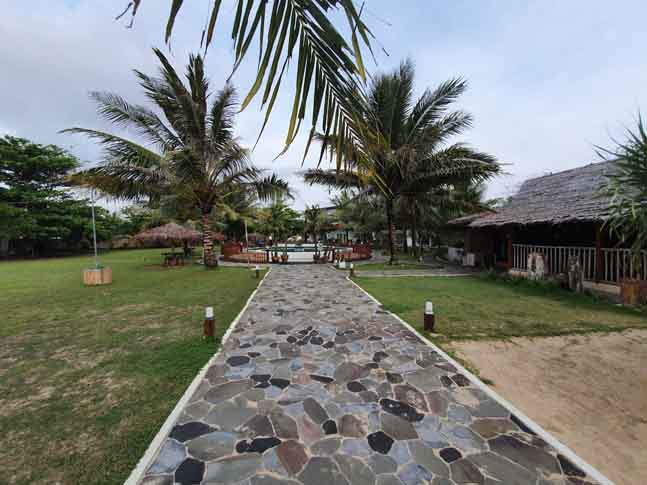 Getting There - how we did it:
Sunday: At 5:45am we left Jakarta. On the way, at 8am we visited Citarik River Rafting and tubing with Arus Liar and had lunch there (see day trip section). At 1pm we continued south and around 4:45 pm we arrived at Turtle Beach Hotel (we should have ordered dinner as soon as we arrived). Immediately we went to see the baby turtle release ceremony at 5:30pm. We then returned to the hotel, had dinner and returned to the beach to see the turtle laying eggs.
Monday: Late breakfast, children observed life at low tide off the hotel beach.  Later, we unintentionally went to see "trash" at Ujung Genteng Beach (which is supposed to be nice beach), returned to the hotel, visited the swimming pool and went to see the baby turtle release ceremony at 5:30pm again.
Tuesday: On the way home we stopped at Curug Cikaso 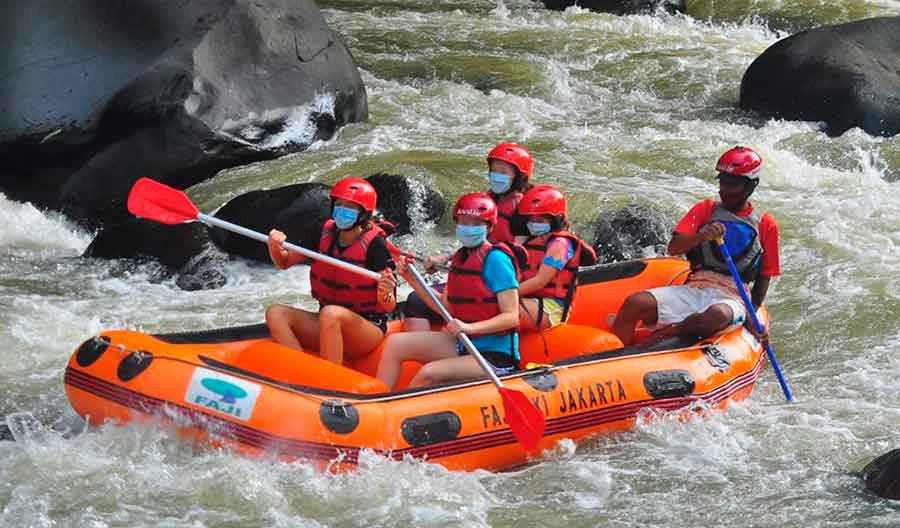 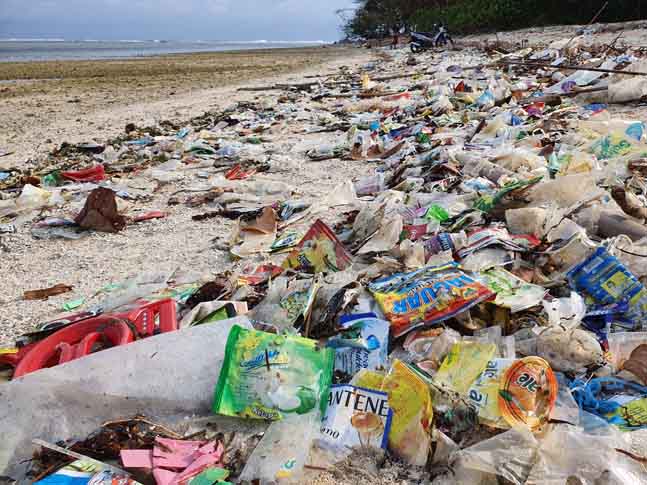 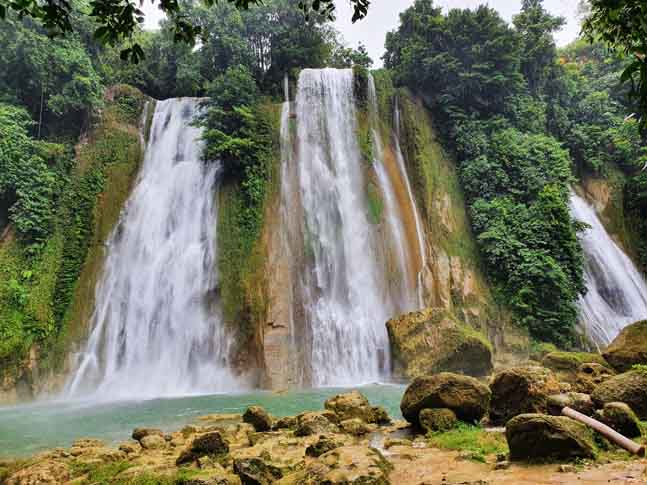 Curung Cikaso
Duration: It took us 5-6 hours from Jakarta to Turtle Beach Hotel by private car, without traffic
Price: Turtle Beach Hotel  Rp 800 000 / night / family room
Baby turtle release ceremony: Rp 10 000/ adult, Rp 5 000/child
Turtle laying eggs: Rp 150 000/ adult, Rp 50 000/child
Time: The baby turtle release ceremony is every day at 5:30pm (if there were turtles born on that day)
Turtle laying eggs: at night 6pm - 6am (this is not guaranteed)
When to go: Please see the section "Time is everything" above.
Mode of transportation: Arriving/departing by own vehicle
What to bring: smartphone/camera, rain coat, jacket - it might be windy at the beach at night
Children's age: Any
Powered by